Posted at 10:05h in Archives by Alain Trudel
Share 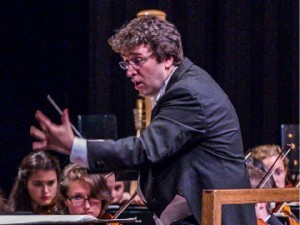 Brady wrote his Violin Concerto in 2012 for Symphony Nova Scotia and that ensemble’s concertmaster, Robert Uchida, who was in Ottawa for the work’s Ontario premiere. Subtitled Requiem 21.5, the concerto contains barely-recognizable fragments from Mozart’s Requiem and Density 21.5, a flute piece by 20th-century composer Edgar Varése.

Brady scored his concerto for strings alone, and paints with a dense, brooding palette. Constant subtle shifts in time signature create an off-balance atmosphere, heightened by flickering, viral effects that spread from the soloist to the different sections. Even the more lyrical sections unfold against a backdrop of nervous rhythmic impulse, with motifs pacing back and forth like caged animals ready to spring.

Uchida, who obviously enjoys playing this dynamic piece, gave an authoritative account. His astringent, shimmering sound is the ideal vehicle for Brady’s writing. The immensely appealing Alain Trudel, the NAC Orchestra’s Youth and Family conductor, was on the podium. His conducting is laid-back and unfussy yet absolutely precise, and he guided the OSO brilliantly through the twists and turns in the music.

Following the concerto was Bartok’s Dance Suite, a thick goulash of folk melodies and dances plucked from across Eastern Europe and imaginatively orchestrated. Trudel conducted with absolute command of the score, pulling a juicy, full-flavoured sound from the responsive orchestra.

Shostakovich’s Symphony No. 6 took up the second half of the program. Completed at the start of 1939, it’s famous for its strange, split personality and unusual structure: a long, slow, funereal first movement followed by two brief, jocular quick ones. Trudel could have asked for more anguished intensity from the strings in the Largo, and the transition to the sardonic little Scherzo, which should be abrupt, was spoiled by a tuning pause. But overall the performance was so valiant and impressively executed that you almost forgot the OSO only performs a few concerts each season.