Posted at 12:32h in Archives by Alain Trudel
Share 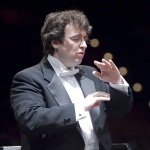 Alain Trudel was buoyant and beatific from Rossini to Dvořák, and at every musical moment in between during the course of Sunday’ Pops concert, Pops By Request. The audience for the Pops series can be credited with loyalty and enthusiasm, and for those attributes they have earned the right to vote on the contents of one concert each season. The formula seems to work – everyone has a stake in the proceedings, and everyone goes away happy.

There was a particularly heart-warming flavor to the afternoon. The choice of repertoire, all familiar chestnuts, contained elements of humor, passion, tenderness, and gusto. The Orchestra appeared to find pleasure in “singing along” with the audience requests; Trudel imparted character, lifting what might have been a perfunctory, auto-pilot performance into something with meaning.

Of serious interest is the mandate of the Orchestra to promote young artists poised on the threshold of their professional careers. Two musicians, Anastasia Rizikov, piano, and Karine White, soprano, came to Orchestra London with polish and genuine artistry – the promise of time in the company of brilliant youth always excites our expectations, and we were not disappointed.

Anastasia Rizikov made her Orchestra London debut in a majestic performance of the Grieg Piano Concerto in A Minor, Op. 16. The Concerto, a staple of the piano repertoire, encapsulates the spirit of youthful romanticism and vitality. Grieg (1843-1907) composed this, his only large-scale work at the age of 24, borrowing some sense of organization from Schumann’s piano concerto, also in the key of A minor; however, this Concerto inhabits its own particular universe, which is stamped with both tempestuous and lyrical elements. This is an ideal vehicle for Anastasia Rizikov, whose musical personality contains an essential fire of life as well as a lyrical instinct.

Just barely 15, Ms. Rizikov has preternatural insight into the moods of the concerto, as she summoned up the nobility of the musical landscape in all its variety. Ms. Rizikov is an extraordinary virtuoso, with abundant technical prowess. But she is more than the sum of ten fingers – she is a consummate artist, born to play, to love the art and act of music-making.  She drew us into the romance of beauty, infusing a famous piece of music with a distinctive vision. And, in her gift of an encore, Anastasia tossed of Lizst’s “La Campanella” from his Grandes études de Pagannini – a fiendish delight, which proved, as if proof were needed, that we were in the presence of a unique and precious artist.

Karine White, a recent Kiwanis Rose Bowl winner, is on the road to a bright future as a soprano. She is a graduate of Western and is now continuing her studies at the University of Toronto. Ms. White has a mellow, well-rounded tone, beautifully suited to the two works she performed. “Solveig’s Lied” by Grieg and “Vilia” from The Merry Widow were expressive in their presentation, filled with the warmth of Ms. White’s personality.

Rossini’s Overture to Il barbiere di Siviglia, the First movement of Mozart’s Eine kleine Nachtmusik, Brahms’ Hungarian Dance No. 5, Hungarian Dance No. 6, and the Finale of Dvořák’s Symphony No. 9 in E minor, “from the New World” comprised the remainder of the program.

Maestro Trudel invited a number of Western students to join the orchestra in the Dvořák piece, in a gesture of town/gown solidarity, and to boost the forces of the ensemble in a piece of grand contour.