Posted at 12:15h in Archives by Alain Trudel
Share 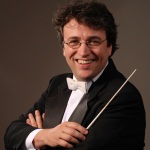 An enthusiastic music director, a re-invigorated orchestra and the premiere of an original Canadian composition mark the next concert from the Coast Recital Society (CRS).

Each year CRS offers a special event for subscribers and the general public. This Sunday (Nov. 14), they will bring the National Broadcast Orchestra (NBO), risen from the ashes of the disbanded 70-year-old CBC Radio Orchestra, to the Raven’s Cry Theatre in Sechelt, under the direction of Alain Trudel.

In November 2008, as Canadians said goodbye to the CBC Radio Orchestra, the NBO was established to carry on the legacy, with most of the same musicians on board. Under Trudel, the orchestra’s mission is to perform, record and broadcast orchestral music for all Canadians, and to champion the work of Canadian artists at home and abroad.

“We’re keeping the music alive,” said Trudel, reached by phone while on tour. “The orchestra is the instrument of our mission, and we provide a platform for new musicians and composers.”

But is it year 71 of the old orchestra or year one for the new? Trudel is going for the fresh, new ideas, and he hopes to reach more of the public through the Internet. Currently their website (http://nboc.ca) features a short video clip of their hopes for the future.

The conductor likes to talk about the music and connect with audiences.

“Harmony between the public and the players is important,” he said. “We’re spending quality time together — it’s like a family.”

Trudel is the man that CRS’s artistic director Frances Wainwright calls “a marvellous, most interesting musician.”

He is one of the most sought after conductors on the Canadian scene and is the recipient of numerous awards, among them the prestigious Virginia Parker Prize, and more recently, the Heinz Unger Prize for Conducting, the only such award in Canada. He is also music director of l’Orchestre Symphonique de Laval and principal guest conductor of the Victoria Symphony Orchestra.

Also performing at Sunday’s concert is violinist Müge Büyükçelen, assistant concertmaster of the Victoria Symphony, where she and Trudel met. Born in Turkey, Büyükçelen studied at the Istanbul State Conservatory. She holds a masters degree in music performance and an associate teaching diploma from the Victoria Conservatory of Music and has won numerous awards.

The program features Haydn and Beethoven in the first half while the second half is dedicated to Canadian composers, among them Jacques Hétu who passed away this year. NBO and the CBC have commissioned a new work, Canadian Seasons, for violin and orchestra by Cameron Wilson, and it will receive its premiere in Sechelt with Büyükçelen soloing.

“You will be the first to hear those notes,” enthuses Trudel. “It’s like giving birth.”

The Galaxie Rising Star Composers’ Competition for 2010 was open to Canadians up to age 35. Competitors submitted short chamber orchestra works for judging by a national panel chaired by Trudel. Last weekend the winner was announced: Joel Balzun, 20, of Calgary earned the Young Composer Prize for his work entitled Miracle Ten-Zero-Two-Five-One. His submission went on to win the overall Grand Prize. David Litke, 32, of St. John’s, Nfld. was awarded the second prize for his work, Aedis. The jury was so impressed with the two winners that Trudel has decided to perform both new works on this tour.

We can’t just play one — they have two distinct voices,” he said.

Trudel is committed to fostering the next generation and is currently the conductor of the Toronto Symphony Youth Orchestra. This interest coincides nicely with CRS’s Artists in the Community outreach program, and on Monday following the concert, Trudel will meet with students at Elphinstone Secondary School, but without the orchestra.

“I’m a trombone player, and I’ll be playing music, having some chat and showing students what their options are as a musician. I started by playing in a community band myself,” he said.

The current tour includes performances throughout B.C. and concludes with a concert at the Chan Centre, the NBO’s official home, that will be broadcast on CBC Radio Two.

Tickets for Sunday’s concert may still be available by calling 604-885-0991 or contacting coastrecital@dccnet.com.